Why Dragon Ball Minus is a terrible story 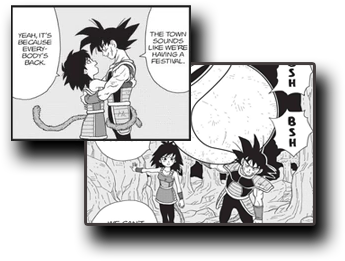 Dragon Ball Minus is mainly looked down upon because of how it contradicts the already established history of a character - Goku's father. What really makes Dragon Ball Minus such a disgrace in my eyes, is because of this particular exchange from the Saiyan Arc:-

Before they start fighting, Vegeta tries to rattle Goku by comparing their statuses in Saiyan society, saying that Goku should feel privileged to fight an elite - that the whole reason Goku was sent to Earth in the first place, is because Saiyans are tested for combat aptitude at birth and those with no promise are sent to subjugate weak planets like Earth.

However, Goku is unfazed by this insult. In fact, he says he's glad to have been considered trash, because that was what had allowed him to escape those very limitations society had placed upon him. It taught him that hard work is more important than social status, or faith placed on him while he's still an infant.

Goku's journey throughout the Saiyan arc is finding out who he is - and it's nothing good. His native species are terrible people. His brother kidnaps his son, his other remaining kinsmen kill his friends. He has saved the world, when he was actually sent there to destroy it, and it was only through a lucky chance that that wasn't what ended up happening.

However, that's exactly who Goku is - he's one of them. Except that he's not. Even as far back as his birth, his people rejected him; labelled him as nearly worthless and shipped him off to do the only thing they judged him capable of doing and that's the beautiful irony of it all.

If they hadn't judged him to be inferior, he probably would have met the same fate as the rest of them and died. He certainly wouldn't have saved Earth and proven himself to be worthy to have trained under gods (Kami, Kaioh).

Only because his fellow Saiyans concluded he had no potential, did he manage to achieve it and now he is face to face with the personification of that bigotry (Vegeta) and he's about to show him what a low born cast-off can do and just how wrong they were about him. That, despite their aspersions on him, he can be better than all of them.

Unless, of course you believe Dragon Ball Minus, where his parents love him so much, they send him to Earth to thrive, which is exactly what he ends up doing anyway. YAWN!

Reply LebnGlync
11:23 AM on May 19, 2021
canada pharmacies online no 1 canadian pharcharmy online Periactin